The theme for this year is ‘Let it Snow’, for what are, I hope, obvious reasons. There are five different fragrances to enjoy:

Fruity and warm, this fragrance combines berries, orange and cherries with a hint of vanilla and sugar:

Back for a third year, this fragrance has proved so popular in the past that I couldn’t NOT bring it back.  It’s a delicious blend of buttery peppermint and sugary vanilla – do not eat!! 😀 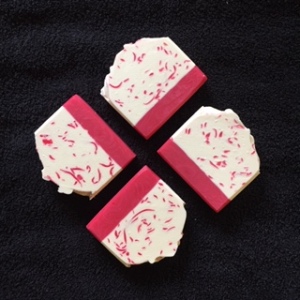 I’ve never made a blue Christmas soap before and with a color like this I couldn’t resist a Frozen reference.  The fragrance is a complex blend combining herbal and fruity top notes, middle notes of jasmine, cinnamon and clove and base notes of amber and patchouli. It’s a really difficult scent to describe but it’s heady and exotic and perfect if you’re looking for something a little less traditional.

Back for its second year, this fragrance is absolutely gorgeous and proved hugely popular last year. Ginger and cinnamon, vanilla and freshly baked cake give a warm, comforting scent perfect for winter days. 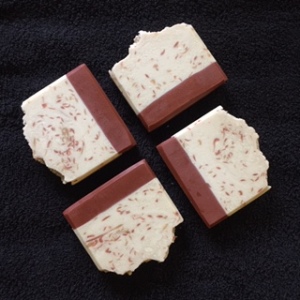 A strong, rich and spicy orange and cinnamon blend, heartwarming and cosy.

All available from week commencing 11th November. Pre-orders being taken now, £4.50 each.

My hands-down-most-popular summer special last year was my Lemon Verbena Confetti, so obviously I had to make it again this year.  It has a white base colour, is crammed with multi-coloured soap shavings and is fragranced with an amazing smelling Lemon Verbena fragrance oil.  I LOVE lemon verbena – it’s fresh, crisp and citrussy with herbaceous notes, but sadly, this particular lemon verbena fragrance does NOT behave itself in cold process soap.

I knew from my experience using last year that it was a fast mover, so I thought I was well prepared this time. The soap shavings were ready to go, the oils and lye were at room temperature, I didn’t discount the water, and was prepared to work quickly. It wasn’t enough…

Soap shaving ready to be added…

I added my titanium dioxide AND the Lemon Verbena FO to to my oils, added the lye water and KAPOW!  it solidified immediately. I refused to be beaten.  I splodged the stick blender in and loosened it up a bit before adding all the soap shavings. How much soap shavings you use is entirely up to you – I don’t measure it out, I just mix in more and more until it looks like enough <not helpful sorry>: 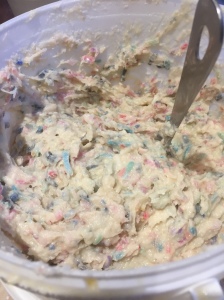 I mixed as far as I could with a spoon but in the end I had to plunge in my (gloved!!) hands to give it a thorough mix. It was the only way to get everything properly combined without breaking up all the soap shreds with the blender.  I also used my hands to get the whole lot into the the moulds (one benefit of making confetti soap – two batches with added confetti makes enough soap to fill three moulds – yey!)

Two days later I unmoulded and cut, and the result wasn’t too shabby:

It has a few small air holes here and there, trapped during the mould filling, but it’s pretty good, considering!

Incidentally, the company from whom I bought this FO claim on their website that it causes no acceleration in CP soap, but when I asked in a FB group whether anyone else had had an issue with this particular FO, it seems to be fairly common. Ah well, forewarned is forearmed eh?!

In My Soap Pot

Your online magazine for soap making

From Earth to Body with Love
Point of Interest!

Damn, Girl. Get Your Shit Together.

Unsolicited advice for shit you didn't know you were doing wrong