Last night I had the niggling feeling that I should be doing something.  I wouldn’t come to me though, so we spent the evening binge watching Better Call Saul (have you seen it yet?  I LOVED Breaking Bad, but didn’t think much to the idea of a spin off so avoided it despite Netflix’s best attempts at drawing me in. Given that it has the same writers, producers and directors I really should have known better, but there we go – Netflix 1, Me 0  Mind you, it has tried to foist some real doozies on me recently – the new Lost in Space remake for one – arrghhh!  Anyhow, within three seconds of waking up this morning I remembered just what it was I should have been doing last night – writing this…  Guess I’m not quite as firmly back in the saddle as I thought I might be ;-D  Now, clearly I realise that  nobody is out there desperately refreshing their screen in the hope that a new post from me will pop up, I’d like to maintain some form of regularity, so I apologise!

Well then, what’s been happening in my soapy world over the last week? On Monday I sent out orders that had come in over the weekend, and Tuesday was spent wrapping and labelling. Again.  I don’t think I realised when I decided to turn my hobby into a business that, while I would get to make a lot of soap, I would also have to wrap and label a lot more soap too.  Ah well, at least I’m not sweeping chimneys!

On Wednesday I had my first big soaping session in about three weeks.  I stocked up on Serenity (patchouli, ylang ylang, lemon & sweet orange essential oils) and Bewitched (a dupe of the ‘Love Spell’ designer perfume), 120 bars in total:

Thursday was another day of non-stop wrapping and labelling, oh, and a little bit of photography.  I’m still trying to get good shots for my website, and I quite like this one of Traeth Craig Du (Black Rock Sands):

On Friday I cut the batches that I’d made on Wednesday.  I took a very quick snap of them just cut, so forgive their rather tatty appearance.  I also got a touch of partial gel in the Serenity, which hasn’t happened before – I’m trusting they’ll look fine once they’ve been tidied up and bevelled:

In the afternoon I donned my science coat (not really) and made a few more batches of emulsified sugar scrub. It’s one of the things I’ve been working on whenever I have a spare half day, and I have to say I absolutely love this stuff. I’ve whittled my recipe down to three options, and I’m hoping I can finalise the recipe soon.  I have so many things I want to launch this year, but at the very least there’ll be cold process shampoo bars and these sugar scrubs (fragranced with mandarin essential oil in this case) :

So that was it – my work week in soap.  This coming week is going to see more soap being made, including shampoo bars, and more work on the sugar scrubs. I’m hoping to be able to send off for my scrub assessments sooner rather than later (as they can take a good few weeks to get done) and in the meantime I’ll have to think about labelling.

Have a great week everyone, and if you’re in the UK, what about this weather eh?  Absolutely glorious, although it does mean watering my hanging baskets a lot more often than I’m used to!

Thanks for reading – back soon!

Did you think I would make it back again so soon? It wasn’t a given, to be honest. I truly have got out of the habit of blogging, so it came as a bit of a shock to the system this evening when I realised it was Sunday and I really should be pressing ‘publish’ on a blog post at some point… Ah well, I made it, that’s all that matters.

So I guess today’s post really should be titled ‘The Last Three Months in Soap’, but like I said in my last post, I’m not going to give myself palpitations by trying to cover everything that’s gone on since I was last posting regularly, I’m sure it will all come out over time…

Back to this week then. This almost feels like a confession, but it’s been over a fortnight since I made any soap. That’s not strictly true as I did make a small, very special batch for friend a week or so ago (more about that one in a forthcoming post) but soap for the business? Over a fortnight. Fortunately I have over 800 bars cured and ready, and another 400 at various stages of curing, so I’m not too desperate, but I’ve sent out a lot of wholesale orders recently so I want to top up the shelves this coming week (yey!!)

No, the last few weeks have been about wrapping, labelling, and sending out order. Not just soap either. The bathbombs are starting to take off in a big way, and they’re being stocked by quite a few of my soap retailers now, and I’m getting a lot of repeat business. That’s all well and good (great even), but keeping up with demand is becoming an issue. Some of the time I would previously have spent making soap is now being spent making bathbombs, to the extent that I even spent quite a few hours making them today (On Fathers’ Day. Ooops. Well, it did mean that my better half got to spend a lot of the day with the kids – that’s what it’s all about right?? And we did go out for breakfast, en famille, to mark the occasion, so…) I digress, again… Right – bathbombs:

I have a few new wholesale customers since I last updated the blog, but I’m going to save them for future posts and give them the spotlight they deserve. I’ve also sent out my first large order for wedding favours – I’ll be writing a post about that separately too.

On a more personal note, my ankle still isn’t right from when I sprained it three months ago, just before my last update post actually. It didn’t stop me from going to my kickboxing grading last week though – I am now officially a purple belt kickboxer. Hard to believe that I’ll now be working towards a belt with some brown on it!!

Oh, and having just quickly skimmed over that last post, I saw that there was a bit of a teaser at the end about an Instagram giveaway that I’d won?  I suppose three months is long enough to keep you in suspense (lol!!) so here’s what I got – a handmade fused glass wave by Pam Peters Design – isn’t it absolutely gorgeous?

I’m going to leave it there for this post. It feels a little disjointed and not particularly informative, but it’s a post – woop!  I’ll be back into the swing of things again very soon, I’m sure.

June? June?? JUNE??  Erm… How did that happen exactly?  It’s almost two and a half months since I last posted, and if I’m honest, I do know how it happened.  There’s been so much going on that I should have written about, but didn’t get round to, and those things just kept building up until I felt I could never get caught up.  It’s been a bit of a Catch 22, loads to write about, no time to write, more to write about, even less time to write about it, et cetera, et cetera blah blah blah…

But on Saturday, I got a bit of a kick up the bum.  I received notification that this blog had been placed in the top 5 (Ok, at No. 5 ;-D) Soapmaking Blogs in the UK. You can see the post here.  The criteria were:

And it was that third bullet point that finally got me REALLY wanting to write again.  Quality of posts?  Well thank you, I’d better crack on.  Consistency of posts? Oh, um, yeah, sorry, I seriously DO need to crack on.

So please accept my apologies. There has been a lot going on, and while I’m not promising to give a blow by blow account of the last few months, I am back.   I am over my post paralysis, and I will be posting waaaay more regularly from now on.

Oh, and here’s a picture of Sugar Drops, mid-cure, because you know I can’t share a totally image free blog post 😀 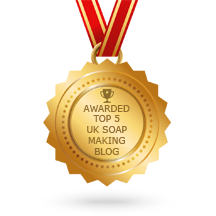 The Craft Booth
In My Soap Pot
Colin's Beauty Pages

From Earth to Body with Love
Point of Interest!

Damn, Girl. Get Your Shit Together.

Unsolicited advice for shit you didn't know you were doing wrong