July.  JULY guys!!  How the hell did that happen?  Officially half way through the year, closer to next Christmas than last… Uh oh…  Mind you, it couldn’t possibly feel LESS Christmassy here in north Wales; our heat wave continues, very unusual weather for us, and there’s a lot of huffing and puffing and complaints that it’s too hot.  Well not for me it ain’t.  I’ve been waiting YEARS for this kind of weather, seriously, years. Since the last proper heatwave in 1976 in actual fact (I’m not even kidding).  Hands up who thinks it’ll last juuust up until the schools break up for the summer holidays?

We’re lucky enough to have a river run through our village, one that’s swimmable in, and that’s where we’ve been after school every day this past week.  I don’t often tend to work past 3pm anyway, as that’s when the kids finish school, but I will occasionally go back to the office after my husband finishes work at 4pm if I have a lot on.  There was no chance of that happening this week.  Swimmies on, down the river, and a cooling dip was in order every single day – bliss.  These are the kind of childhood memories that we dreamt of giving our kids when we left the bright city lights to move back home to the countryside: 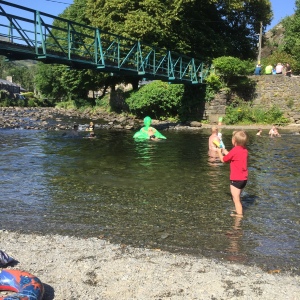 River Fun in the Sun

It’s been another fairly quiet week on the business front.  On Monday I sent out a few orders that had come in over the weekend, and the rest of that day and Tuesday was spent in the office, wrapping and labelling.

On Wednesday I got to make soap again – happy days!  60 bars of Welsh Rose and 60 bars of Scrubby Peppermint:

On Thursday I was back in the office, making sure everything was ready for Saturday’s Craft Fair in Porthmadog.  I cut the soap from the day before – I usually wait 48 hours before unmoulding and cutting, but for some reason I thought Thursday was Friday (and I also forgot to steam the tops, so they’re a bit more ashy than usual) This is a quick ‘first look’ snap of both varieties.

Friday was a short day as I had an appointment at the hairdressers. I did take a few photographs though. I still have this crazy idea that I’ll have a live website sometime soon, so I’m still playing with photography ideas.  This one is Sugar Drops in its packaging:

Saturday was my first Craft Fair since the end of April: 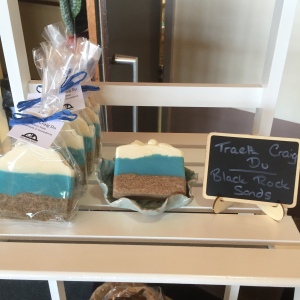 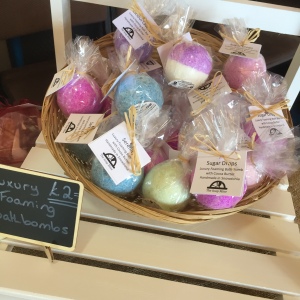 It was a sweltering hot day, and I wasn’t expecting much, but I ended up having a pretty good day.  This was mostly thanks to returning customers which was really gratifying.  I was so pleased that Saturday was relatively successful, it raised my spirits somewhat as in all honesty, I’ve been feeling a little downhearted this last 7-10 days.  I know there are ups and downs in every business, and while I’ve had an awful lot of ups this year, the downs still have an effect.  I’ve contacted a few potential retailers recently with a view to them stocking my products.  Of the four most recent, three haven’t even acknowledged my communication, and the one who did, and to whom I sent samples (which were received and described as ‘lovely’) has since cut contact with no explanation.  I like to think I’m fairly thick skinned, and I would have no problem whatsoever with a ‘thanks but no thanks’ kind of response, but this made me question my quality of my products (which is patently nonsense given the number of returning customers and glowing testimonials I have).  Ah well, onwards and upwards as they say.

Sunday was another very satisfying, if exhausting, day, continuing the saga of taming our garden.  It was mostly heavy work – digging, landscaping etc – with nothing spectacular to show at the end, but we GOT STUFF DONE, which always feels good.  I do have one single raised bed that I’m particularly happy with though:

In there I have loads of broadbeans, some tomato plants, two courgette plants, a cucumber plant, runner beans, sweetpeas and sunflowers.  Not bad for a small plot eh?!

Thanks for reading, I’ll be back again soon. Have a great week everyone!