Did you think I would make it back again so soon? It wasn’t a given, to be honest. I truly have got out of the habit of blogging, so it came as a bit of a shock to the system this evening when I realised it was Sunday and I really should be pressing ‘publish’ on a blog post at some point… Ah well, I made it, that’s all that matters.

So I guess today’s post really should be titled ‘The Last Three Months in Soap’, but like I said in my last post, I’m not going to give myself palpitations by trying to cover everything that’s gone on since I was last posting regularly, I’m sure it will all come out over time…

Back to this week then. This almost feels like a confession, but it’s been over a fortnight since I made any soap. That’s not strictly true as I did make a small, very special batch for friend a week or so ago (more about that one in a forthcoming post) but soap for the business? Over a fortnight. Fortunately I have over 800 bars cured and ready, and another 400 at various stages of curing, so I’m not too desperate, but I’ve sent out a lot of wholesale orders recently so I want to top up the shelves this coming week (yey!!)

No, the last few weeks have been about wrapping, labelling, and sending out order. Not just soap either. The bathbombs are starting to take off in a big way, and they’re being stocked by quite a few of my soap retailers now, and I’m getting a lot of repeat business. That’s all well and good (great even), but keeping up with demand is becoming an issue. Some of the time I would previously have spent making soap is now being spent making bathbombs, to the extent that I even spent quite a few hours making them today (On Fathers’ Day. Ooops. Well, it did mean that my better half got to spend a lot of the day with the kids – that’s what it’s all about right?? And we did go out for breakfast, en famille, to mark the occasion, so…) I digress, again… Right – bathbombs: 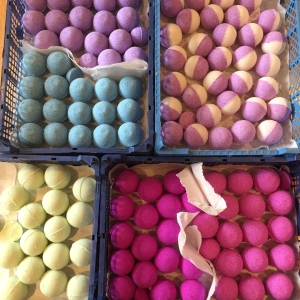 I have a few new wholesale customers since I last updated the blog, but I’m going to save them for future posts and give them the spotlight they deserve. I’ve also sent out my first large order for wedding favours – I’ll be writing a post about that separately too.

On a more personal note, my ankle still isn’t right from when I sprained it three months ago, just before my last update post actually. It didn’t stop me from going to my kickboxing grading last week though – I am now officially a purple belt kickboxer. Hard to believe that I’ll now be working towards a belt with some brown on it!!

Oh, and having just quickly skimmed over that last post, I saw that there was a bit of a teaser at the end about an Instagram giveaway that I’d won?  I suppose three months is long enough to keep you in suspense (lol!!) so here’s what I got – a handmade fused glass wave by Pam Peters Design – isn’t it absolutely gorgeous?

I’m going to leave it there for this post. It feels a little disjointed and not particularly informative, but it’s a post – woop!  I’ll be back into the swing of things again very soon, I’m sure.