It’s been a quieter week on the soaping front.  I was grateful for that to be honest – we had family visiting for the first half of the week, and I’ve been getting into the swing of Blogtober.  Day 9 today, almost a third of the way through the month already!!

On Monday I made two double batches, both restocks, of Welsh Rose and Blodau:

The Welsh Rose wasn’t my best – it accelerated a little and the colours weren’t as bright as they usually are, but it’ll be fine.  The Blodau on the other hand, turned out great  – this is a closeup of it in the mould which proved to be really popular on Instagram:

Close up of Blodau in the mould

The new wire for my cutter arrived on Tuesday, and it would appear I ordered the wrong one again. AARRGGHHH  It was a coiled string (?) and slightly thicker than I expected it to be.  Well, we fitted it onto the cutter anyway (taking a bit of a risk but by Wednesday morning I had 12kg of soap to cut and I couldn’t risk it getting too hard) and although it IS a little too thick, it did the trick.  I did a bit of research and discovered that I probably need 20 gauge wire, so I’ve ordered some and it should be here soon.  What a flippin’ palaver!

On Wednesday evening I gave my regular weekly soapmaking presentation.  I can’t tell you how much I enjoy giving these. It often turns into a bit of a conversation rather than a ‘talk’ and I get to indulge in waffling on about my favourite subject to a captive audience. AND then I get to sell them soap too!  I’ve only got another two or three weeks to go before they stop for the winter, but the manager has already asked me to go back next season – hurrah!

I took some better pictures of my Christmas specials, which I’ll be sharing with you this week, and of the mountain soap (from yesterday’s post) and this one – the Blodau from earlier this week:

I realised that the reason I don’t get round to sharing cut pictures as much as the ones in the mould is that I don’t usually tidy them up until they’ve been curing for a couple of weeks, so I made and effort to try to tidy up the freshly cut bar and take a picture, and it worked ok I think: 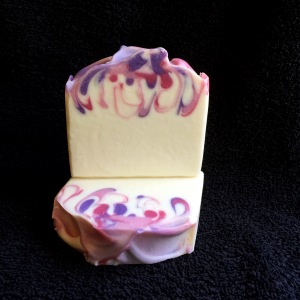 Towards Friday evening I started to develop a sore throat which worsened as the evening went on and meant I got very little sleep on Friday night. Saturday was spent feeling ill, lethargic, weak and sorry for myself generally, and Sunday was mostly spent in bed, trying desperately to kick whatever it was that was making me feel so rubbish…

I’ll be back tomorrow, come what may, hopefully with a clearer head and body that’s more willing to co-operate!!