I see a lot of discussion on line about how to deal with soda ash on soap tops. Freshly poured soap is so glossily glorious – it can be a disappointment when you come back to it a day later to find it dulled and marred by an ashy deposit: 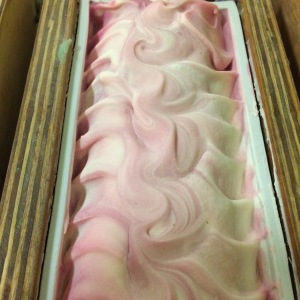 The ash is formed when the lye (Sodium Hydroxide, NaOH) in the soap reacts with Carbon Dioxide CO² in the air, and is totally harmless; the soap is no less effective. Nevertheless many find it to be aesthetically displeasing, and I’ve seen many methods used, some fairly elaborate, to eradicate it.  In my early soapmaking days I was advised dip each individual bar into a pan of boiling water.  Yes, this removed the ash and resulted in wonderfully glossy bars, but wow, it was tedious.  I then read that could simply hold each bar in the steam that came from a boiling kettle. Only kettles these days don’t boil continuously – and flicking that switch 20 times a minute was….tedious.  Then I had a lightbulb moment – I could hold the soap in the steam that came from a pan of water at a rollling boil.  Yes, I am FULLY aware that I could have easily missed one of those steps out… That worked too but was still pretty longwinded and let’s be honest, tedious.  There was also the ever present risk of scalding myself trying to use these methods. I came perilously close, believe me.

These days my ash removing regime is simple, fast and effective. I use an ordinary steam iron, on steam setting, to remove the ash from the soap tops before I’ve even unmoulded them. Half of this loaf has already been steamed:

My old, but trusty, Morphy Richards… 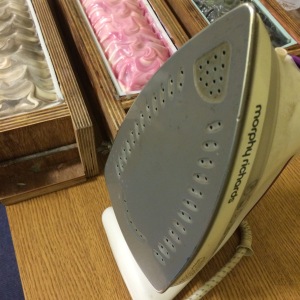 Holding the iron just a couple of inches above the top of the soap, I press the steam button continuously to cover the soap in steam, moving the iron back and forth. This is the result

Easy peasy!  And absolutely zero chance of scalding myself.  It looks freshly poured but is actually fully set up and ready to be unmoulded.  I usually leave it for about 10 minutes to dry off, and then unmould:

And cut – notice how glossy it still is:

After the cut, before the tidy up – perfectly dry and glossy:

I’ve made a video of the steaming process, but I’m struggling to upload it :-S Once I figure it all out I’ll add it to this post 😀